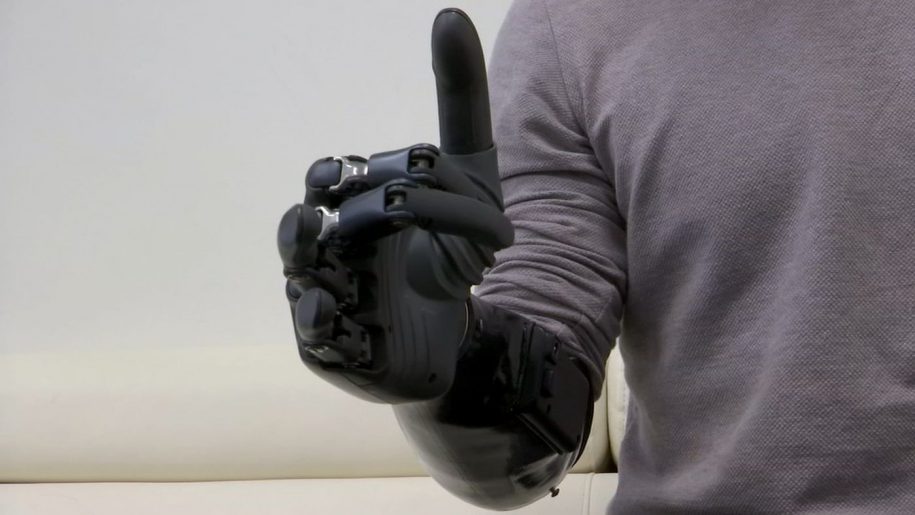 With about 30 minutes of training, a user can start to achieve movements that are very similar to those of a non-amputee, just by thinking about them, according to BrainCo.

SOMERVILLE, Mass. — A Somerville company has created a new, high-prosthetic arm that could transform the way amputees are able to interact with the world around them.

Time Magazine selected this device, developed by BrainCo, as one of their top 100 inventions for 2019. Boston 25 News was at their facility when Yue Gu was playing the guitar with the assistance of a BrainCo hand.

“For the first time ever, we’re giving people the opportunity to get the same level of function that people who are not amputees have,” said Max Newlon, BrainCo’s president.

Newlon believes this device is a game-changer for people who’ve lost a limb.

“Instead of pre-programmed gestures, what we’ve developed is this world-class algorithm that understands the user’s intentions,” he said.

With about 30 minutes of training, a user can start to achieve movements that are very similar to those of a non-amputee, just by thinking about them.

The BrainCo hand helped a woman play the piano and allowed a teacher to take a book off a library shelf and start leafing through the pages on his own.

There have been many advances in recent years with other types of prosthetics, but Newlon said the BrainCo hand isn’t just more evolved, it’s also less expensive. A typical prosthetic arm can cost north of $50,000. BrainCo is planning to sell their device for about $10,000.

The company hopes to receive FDA approval later this year and is already thinking about how they can help more patients.

“In fact, lower-limb amputees are more common, people who have lost some portion of their leg. We are starting to explore if there are ways to apply this technology and the expertise that we have been building up to help other types of amputees,” added Newlon.